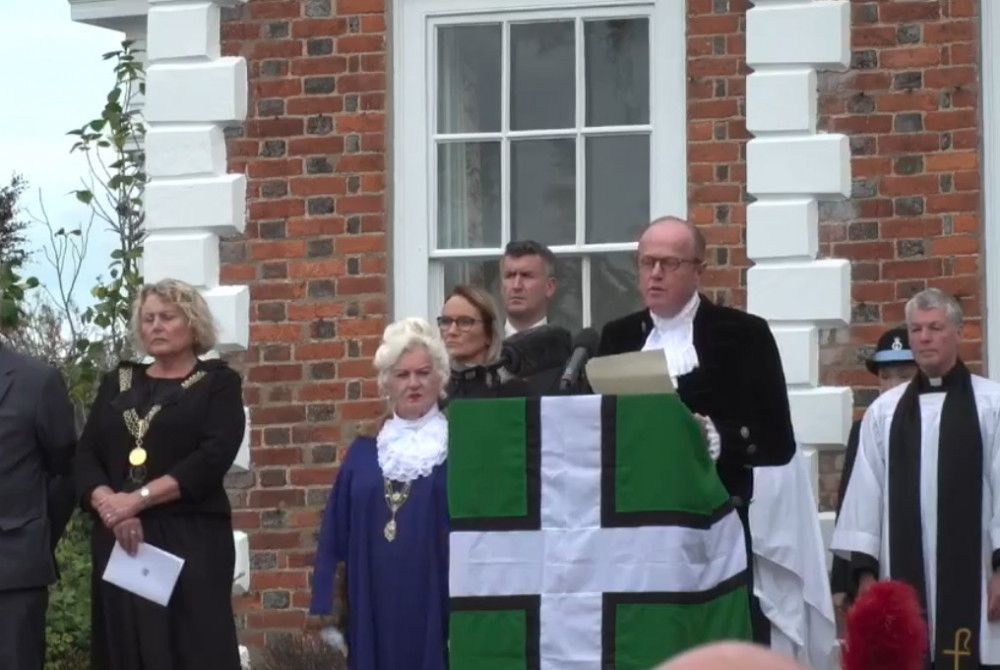 Devon's first reading of the proclamation of King Charles III was read on Sunday by the High Sheriff of Devon, Richard Youngman at County Hall.

Local dignitaries, council members and other leaders in the county joined members of the public to hear the announcement which was introduced by His Majesty the King's Lord Lieutenant of Devon David Fursdon.

Opening the ceremony, the Lord Lieutenant said: "Ladies and gentlemen, although the world has moved on and instant communications is now the norm, there is also a place for historical precedent.

"So as Lord Lieutenant of Devon and the monarch's personal representative here, I welcome you to this meeting place at an important time in the history of our nation to hear the proclamation of good news.

"We are gathered here today, Sunday the 11th of September 2022, to receive crucial information which originated in the City of London and is being disseminated throughout the kingdom.

"Please take note of it and spread it wide among the cities, towns, villages and hamlets and along the highways and byways of Devon. This message will be delivered by the High Sheriff of Devon in accordance with the customs and traditions of our country and our county."

Following a fanfare, High Sheriff Richard Youngman delivered the formal proclamation, which read: "Whereas it has pleased Almighty God to call to His mercy, our late sovereign Lady, Queen Elizabeth II of blessed and glorious memory by whose decease the crown of the United Kingdom of Great Britain and Northern Ireland is solely and rightfully come to the Prince, Charles Philip Arthur George.

"We therefore, the Lords, spiritual and temporal of this realm, and members of the House of Commons, together with other members of her Late Majesty's Privy Council and Representatives of the Realms and Territories, Aldermen and Citizens of London and others, do now hereby with one voice and consent of tongue and heart, publish and proclaim that the Prince Charles Philip Arthur George is now, by the death of our late sovereign of happy memory, become our only lawful and rightful Liege Lord Charles III.

"By the grace of God, of the United Kingdom of Great Britain and Northern Ireland and his other realms and territories, King, Head of the Commonwealth, Defender of the Faith to whom we do acknowledge all faith and obedience with humble affection, beseeching God by whom kings and queens do reign to bless His Majesty with long and happy years to reign over us. Given at St James's Palace this 10th day of September in the year of our Lord 2022.

"God save the King."

Proclamations will also be read out in Devon's districts, boroughs and towns over the next few days.