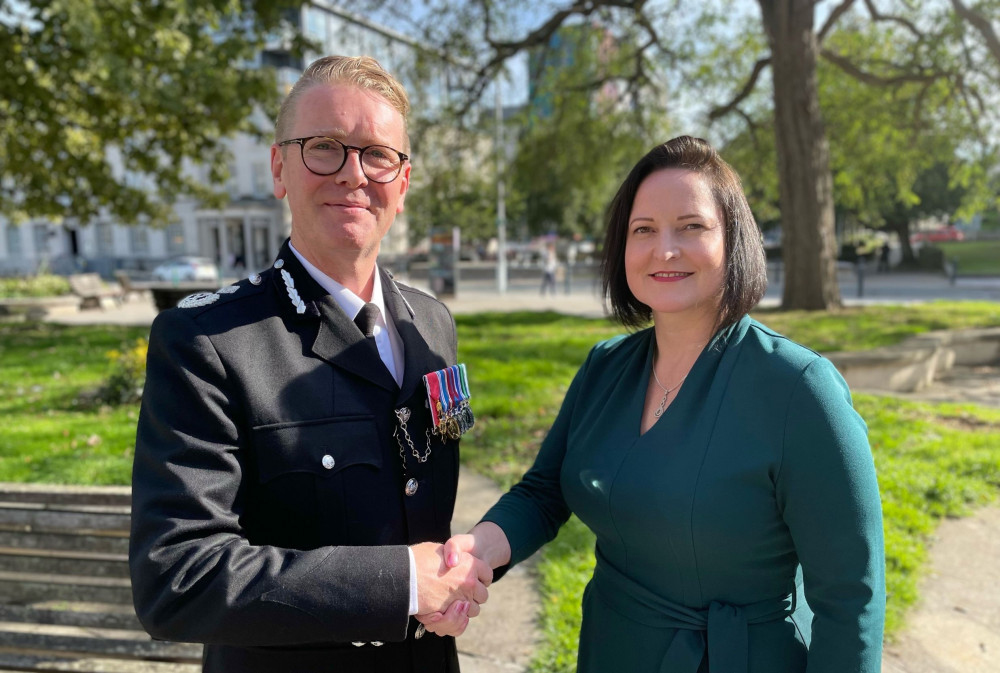 Devon and Cornwall Police's new chief constable was quizzed on how he plans to tackle hate crime, community policing and violence against women and girls before being formally approved for the role.

At a confirmation hearing of the Devon and Cornwall police and crime panel in Plymouth on Wednesday (21 September) Will Kerr OBE, a deputy chief constable in Scotland, was endorsed as the region's new chief constable.

His appointment follows the retirement of Shaun Sawyer last month who had been in the role for more than a decade.

Police and Crime Commissioner Alison Hernandez announced at the beginning of the month that DCC Kerr was her preferred candidate for the job, describing him as "an exceptional strategic leader" – but the police and crime panel is required to approve her decision.

"Although you've invited people from the cities, we are covered in towns and parishes through Devon and Cornwall," she said.

"So, can I have assurance that the towns and parishes will be equally as well looked after as the cities?"

DCC Kerr pointed to his experience of working with rural communities in Scotland.

He said: "I am responsible for local policing across the whole of Scotland at the moment and as I'm sure most of you are aware, outside the central belt between Glasgow and Edinburgh, most of Scotland is rural and isolated.

"It's a third of the landmass of the United Kingdom and 60 per cent of the coastline. It's got 90 inhabited islands and quite a few of those have very specific needs, which means that they need a very specific and a very sensitive policing response, which is locally-based, locally respected and recognised and locally present."

Panel member and Labour councillor for St. Peter & the Waterfront in Plymouth, Chris Penberthy, asked about the rise in hate crime in Devon and Cornwall, in the forms of racism, homophobia and misogyny.

"Hate crime continues to rise, especially hate crime that is sex or gender-related and that is worrying," said Cllr Penberthy.

"I just wondered whether you had any thoughts specifically about policing within those protected characteristic communities and your approaches there."

DCC Kerr insisted he would address the concerns of all communities and explained: "The job of policing is to continue to build trust and confidence in those communities and lifestyle communities who perhaps haven't had as much trust in the police service in the past to make sure that we continue to get a more realistic reflection of where [hate crime] is happening, both physically within communities and on the streets and increasingly online, which is where the biggest growth of hate crime tends to be."

Labour councillor for St Thomas in Exeter, Laura Wright, spoke about initiatives with the University of Exeter to help young women feel secure and suggested many women do not feel confident approaching police.

She hinted at the Met's handling of the case of Sarah Everard's – who was killed by serving officer Wayne Couzens – and later the conviction of two of his colleagues over racist, misogynist, sexist, homophobic and Islamophobic messages shared in a WhatsApp group with Couzens.

"What's your take on making sure that the public have every confidence in our police force here?" asked Cllr Wright.

DCC Kerr said it was crucially important to restore trust.

He said: "If women and girls didn't feel confident in the presence of, or in engaging with, police officers on the street, then our responsibility was to do something about that, not to tell people to wave a bus down, not to tell people to do something that was impractical or give a sense that the victim or somebody who's scared and on the street might be in some way responsible for what has happened."

A question was also asked about political impartiality.  East Devon Council Leader Paul Arnott (Democratic Alliance Group, Coly Valley) highlighted the chief constable's appointment by Tory Commissioner Alison Hernandez and said: "What will you do if you find you have to conduct an investigation in which actions of that political party in Devon and Cornwall come into question?"

DCC Kerr offered reassurance and said he would remain completely independent of political groups: "Please don't labour under any worry or misapprehension that after 33 years in policing and having worked for 26, 27 years in Belfast, I absolutely understand what the boundary lines are.

"I will not hesitate to take whatever action the policing needs to take to protect the integrity of the rule of law."

After his appointment to the role DCC Kerr said: "I am delighted to have been appointed by the police and crime commissioner as chief constable of Devon and Cornwall Police.

"This is a force with an impressive and proud heritage, and a policing style rightly grounded in neighbourhood policing and on local community needs.

"I have already been impressed by the excellent work that goes on every day and I look forward to meeting the diverse communities living in this fantastic part of the country. It will be a privilege to serve as your chief constable, and I'm very much looking forward to starting in this role."

DCC Kerr spent over 27 years in the Police Service of Northern Ireland and joined the National Crime Agency (NCA) on secondment in 2017. He was awarded an OBE in 2015 and joined Police Scotland in 2018.

Dawlish: 12 planning applications near you, including tree felling, conversions