Give your views on potential housing sites in Dawlish 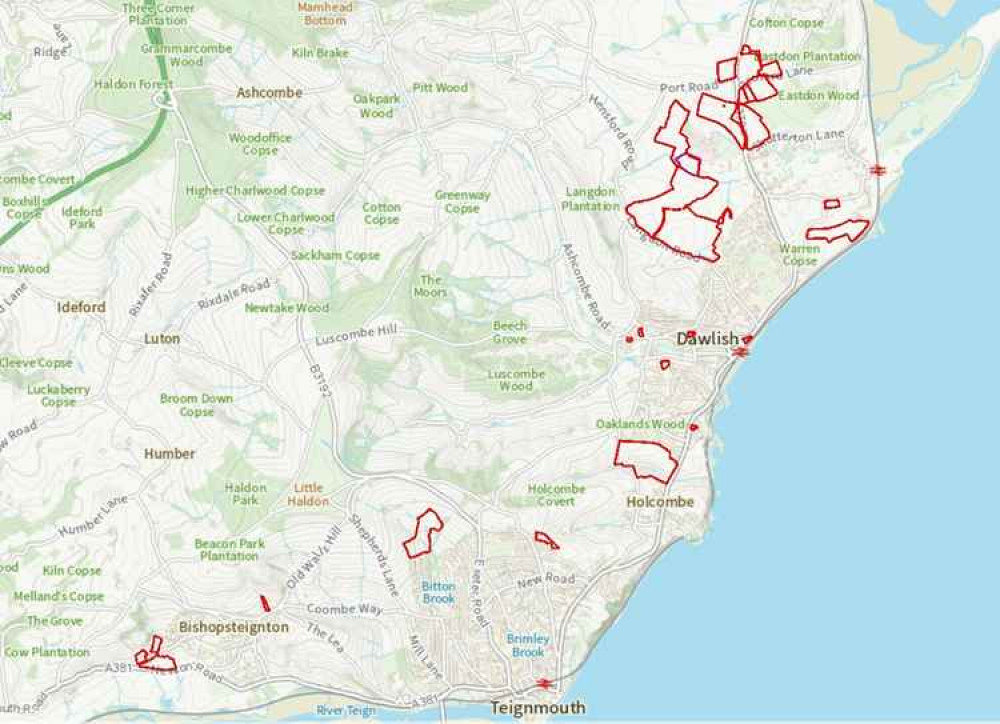 The proposed sites around Dawlish

Teignbridge residents are being urged to help the council find the 'least damaging' sites for thousands of new homes across the district – including around 1,000 that are allocated to the Dawlish area.

More than 100 sites have been identified as sites for future housing as part of the Teignbridge Local Plan that will run until 2040.

This morning (Tuesday, June 1), the district council's executive unanimously agreed to launch a consultation on Part Two of the draft plan, which focuses solely on where development could take place and includes site options for housing development, employment land, secondary schools and considers evidence relating to renewable energy provision.

But while councillors agreed to put the plan out to consultation, they made it clear that they were not happy with the Government targets for the number of new homes to be built each year in the district.

What the councillor for Dawlish said

Cllr Martin Wrigley, executive member for housing and a Dawlish Town and Devon County councillor, said: "There are more sites than we need, which mean we can make a choice, even if it is the best of a bad bunch.

"I have major objections to the framework we have to work to and that the Government dictates the number of houses, far more than we need locally.

"This set of sites isn't really our Local Plan, but the Government's, but if you don't supply the volume of land to satisfy the numbers, then they take away the controls and developers have the freedoms and we end up with housing that is neither affordable nor suits the needs of the local population.

"None of this is delivering what we really need – affordable and secure homes for people – but we are left with a Local Plan with a set of development sites which isn't based on local needs, wrong houses in the wrong places, and not enough local and affordable houses. I support the consultation but we need to pick up the sites that do the least harm to our environment."

Why it's important to have your say

Councillors have accepted that not all of the proposed sites will be popular. But not all will be required, and the consultation is seeking information and comments from the public and statutory consultees, particularly on planning issues relating to the site options. Residents are being urged to participate in the consultation as thoroughly as they can.

Where in the district could the homes be built?

Taking account of housing provision already allocated in the current Local Plan, new sites need to be identified in the updated plan for an additional 7,272 homes.

The Heart of Teignbridge area around Newton Abbot has provisionally been allocated for 2,920 homes, with the edge of Exeter for a further 1,800 homes, around 1,000 homes in Dawlish, 100 homes in Teignmouth, 250 homes in Bovey Tracey, 250 homes in Ashburton, and 960 homes in the villages.

Chudleigh, Bickington, Ide and Shaldon however will not see any sites allocated as nowhere suitable came forward during the call for sites. Cllr Gary Taylor, executive member for planning, said that it was vital that there was a Local Plan in place with a five-year housing land supply to stop unwanted development on unwanted sites. He gave the example of the Inglewood development in Paignton that was given approval at appeal, against the wishes of locals and the councils, due to the lack of sites in Torbay. He added that the target of 751 houses per year and the subsequent site options is driven by the Government, but that not all sites will be used – for example, the sites identified around Dawlish could deliver twice as many houses as are actually needed. The consultation will give residents eight weeks from June 14 to comment on a range of site development options to meet future local housing and employment needs for the next 20 years, as well as seeking views on locations for a new secondary school in Newton Abbot. Most of the sites identified are around the district's towns, near access to services, employment and public transport as well as walking and cycling connections, with the aim to minimise the need for car travel and so reduce the impact of development on climate change. Some small development sites are also identified in villages where they would help support and maintain existing local rural businesses and services.

No decisions on any of the sites to be allocated in the Local Plan have been made ahead of the consultation.

Local people will be asked to comment on their preferred options and in particular whether development would improve or exacerbate existing local issues, and the factors that should be taken into account in deciding whether the sites should be included at the next stage.